You Only Get So Much By Dan Kolbet 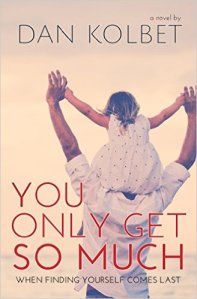 When Billy Redmond returns to his hometown to attend his brother’s funeral, he’s hoping for a quick trip. No reason to stay for more than a few hours. He’s been in self-imposed exile from his family after a tragedy 12 years ago. It’s better this way. He can’t harm people he never sees.

Billy soon finds that his family isn’t better off without him, in fact he’s the only one who can help them. Billy is forced to fight through his tormented past to make a better future for those he loves. He is guided on this journey by a woman from his past, who he quickly realizes was the one who got away.

For Billy, it’s more than a second chance, it’s his last chance to get it right.

I am a former journalist with a major daily newspaper and now am a full-time niche website webpreneur. I love to write, read, drink good wine, and take short naps in front of my fireplace here in the North Carolina mountains.
View all posts by Don Sloan →
This entry was posted in Uncategorized. Bookmark the permalink.

I Will Not Go Quietly
VideoEditingResources

Extraordinary Photography for Motorcycles and Autos

Own A Historic Mountain Inn

Dog-Friendly Environments for Your Best Friend.